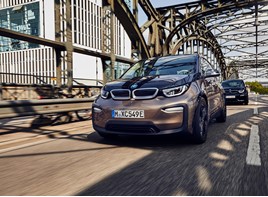 Brexit: the price of new BMW cars increases “independently” of the trade agreement

Fleet policymakers and the leasing industry are bracing for higher prices for new orders for company cars and vans in the event of a no-deal Brexit.

However, in a note from BMW, seen by Fleet News, the German automaker has announced a tariff-related increase of more than Â£ 3,000 on the recommended retail price (RRP) of the BMW i3, whether or not there is a free trade agreement.

BMW had announced in early October that the BMW i3 models, as well as the majority of other BMW models, would be subject to an “economic increase” from the increase in recommended retail prices from January 1, 2021.

Due to changes in ‘product specific rules of origin’ legislation, it is stated that the maximum allowable content of non-EU and non-UK materials means that these models will be subject to additional tariffs after the end of the Brexit transition period.

This will be the case, he adds, “whether or not there is a free trade agreement with the EU”, which means that a further increase in the recommended retail price of BMW i3 models is necessary. .

It indicates that for vehicles under a direct sales agency contract, orders registered by December 31 at the latest will be invoiced at the price in effect on the date of the order.

During this time, orders placed on or after January 1 will be billed as follows:

BMW’s price hike comes after Renault issued its own price warning before a free trade deal was reached.

In a letter from Renault’s fleet manager, Mark Dickens, to customers, he says the automaker has been in discussions with our factories to ensure “increased production of vehicles and parts” to mitigate any risk of disruption. supply at the UK-EU border. .

In addition, he said Renault had increased its capacity and staff to ensure the “on-time delivery of vehicles, parts and accessories to our customers”.

Any customer order created until October 31, 2020 inclusive, will be at a protected price regardless of the import date, he says.

Any order placed from November 1, and which corresponds to a vehicle imported from January 1, could however be subject to a price revision based on the imposition of vehicle tariffs.

In the event that import tariffs apply, Renault indicates that these will comply with the conditions of the World Trade Organization (WTO) and will be added to the price of the order. The prices under WTO conditions correspond to 10% of the total price of the new vehicle, options included.

In addition, it indicates that any vehicle imported from January 1 ordered from November 1 could be subject to revised pricing based on the imposition of tariffs on vehicles.

Finally, it specifies that any customer order created from January 1 would be subject to any new pricing regardless of the vehicle import date.

Dickens wrote: â€œWe will continue to monitor events closely and keep you informed of any developments. “

Fleet News reported last month how automakers wrote to leasing companies warning them that they could not guarantee company car prices beyond the end of the year, even for some models ordered now.

In letters sent to car rental suppliers from major automakers including BMW, Jaguar Land Rover and Mercedes-Benz, they say the threat of a no-deal Brexit was behind the potential price hike.

Talks between the UK and the EU are due to resume today (Monday 16 November) in Brussels. UK chief negotiator Lord David Frost arrived in the city, tweeting that there had been “progress in a positive direction in recent days”.

But he said “important elements” of the deal have yet to be agreed, adding: “We may not succeed.”

Any deal between the UK and the EU would have to be ratified by parliaments on both sides, so time is running out to reach an agreement and get the signature by December 31.

A senior executive working in a FN50 car rental company, said the lack of clarity on pricing was a big problem for the industry.

He said: “Our view is that we should advise customers to hold back orders unless they choose from manufacturers who have said they will respect the prices.”

It is considering a number of customer cancellations for which no price protection applies.

Moreover, in terms of future residuals, he said they were in a state of “limbos”.

â€œThere is an argument that they should increase in proportion to the increase in the prices of new vehicles,â€ he said, â€œbut that would only be if we expected the second-hand market to increase. in value proportionally in three years.

â€œThere is an argument for that, but the future values â€‹â€‹used would then increase in value because of a single tariff that is imposed rather than anything related to the enhanced value.

“Such increases may be correct when looking at the actual price values â€‹â€‹of new vehicles, but it is also a value based on predicting the future value of a tax, which does not seem to be the whole story. absolutely correct either. “

He continued: â€œIf the tariff was imposed only for a period – indefinite – and then removed, what would happen to used car prices? Will they also now increase for a while and roll back or will they stay at the higher value? Will future residuals also increase and then decrease again in this scenario?

â€œEssentially, the uncertainty will manifest itself in the market for new cars and used cars, in our opinion, and will have a destabilizing effect. This is never good news for anyone in the automotive industry.

The Society of Motor Manufacturers and Traders (SMMT) has revealed the cost to the industry of Brexit readiness topped Â£ 735million, with more than Â£ 235million spent in 2020 alone.

Most companies (67%) in the sector say they are doing everything in their power to prepare for the new processes that will come into play on January 1, 70% securing the registration and identification numbers of UK economic operators ( EORI), 60% spending significantly on storage and 52% employing customs officials, as companies also try to prepare for any disruption or delay in supply chains.

However, significant gaps in the industry’s planning capacity still exist, with a lack of clarity on the nature of future UK-EU relations hampering the efforts of nearly nine out of ten companies (86% ) for preparing.

Critical questions remain unanswered. With the industry’s competitiveness based on just-in-time deliveries, companies cannot afford any delays in the supply chain. is vital, says SMMT.

Moreover, even if the UK and the EU enter into a Free Trade Agreement (FTA) from the end of 2020, there is uncertainty as to how companies will prove origin or products; if companies cannot do so, they will not be able to benefit from preferential trade terms.

Mike Hawes, Managing Director of SMMT, said: â€œAs the UK-EU FTA negotiations enter the final stages, now is the time for both sides to keep their promises to protect the EU. ‘automobile industry.

â€œSecuring a deal is absolutely essential, but it cannot be a deal. To work for the UK car industry it has to deliver for UK products and that means securing the right terms and conditions which allow our exports – now and in the future – to be duty-free and quota-free. A deal that fails to meet this target would amount to no deal at all, destroy jobs and dampen the UK’s ambitions to be one of the world’s leading manufacturers and markets for electrified mobility and battery technology.

Musk slashes the price of the Tesla car twice in a week, served with a side of his wacky humor