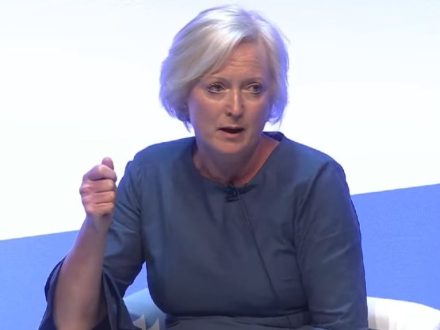 The Chief Nursing Officer for England has made a strong pledge to back protecting the title ‘nurse’ as she calls it a ‘patient safety issue’ at a health conference in Liverpool.

Dame Ruth May also used a roundtable at the NHS ConfedExpo to signal her support for free staff parking and efforts to help community nurses struggling with rising fuel costs.

A session chaired by NHS Employers chief executive Danny Mortimer saw Dame Ruth sit alongside leaders from Health Education England, NHS England and Skills for Care to discuss how to do health and social care the “best employer”.

As part of the discussion, which explored recruitment, retention and the need to support the workforce, Dame Ruth highlighted her support for protecting the title ‘nurse’ in law.

Currently, only the title “registered nurse” is protected, meaning anyone can call themselves a nurse, including those who have been discharged or have no nursing qualifications.

A nurse-led campaign by Professor Alison Leary has sought to change that, following several high-profile cases of people misusing the title.

The government is currently considering whether ‘nurses’ should be protected, as part of an ongoing project to modernize the regulatory system for healthcare professionals.

Speaking at the NHS Confederation conference, Dame Ruth said: ‘The one thing I’m passionate about is protecting the title of nurse.

She added that she thought it was “a patient safety issue” and “something the public wants to see because they want to know who is looking after them.”

She was therefore “happy” and “grateful” that the government was looking into the matter.

Furthermore, Dame Ruth also highlighted the problems associated with the rising cost of living and its impact on the nursing workforce.

As part of this, the CNO said it “absolutely” agrees with the notion of free parking for occupational health staff and believes that efforts should be made to support nurses and community colleagues with rising fuel costs.

The current rate for people on an NHS Agenda for Change (AfC) contract, or with AfC mileage allowances in their contracts, is set at 56p per mile for the first 3,500 miles and 20p for each additional mile.

During the session Dame Ruth highlighted and praised a trust in Cambridgeshire which had ‘removed’ the 3,500 limit. She said it was the ‘right thing to do’.

“There’s something about that cost of living…it affects the vast majority of society, but especially those at the bottom of our strip,” she said.

His comments follow the profession’s continuing concerns over the cost of fuel and a recent letter written by the Queen’s Nursing Institute to the Health and Social Care Secretary about the situation.

Two key issues overriding CNO were the “supply” of nurses, including international and domestic recruitment, and retention, she said in her opening remarks for the session.

There is a “huge demand” for nurses and midwives across the health service, she said, while noting the almost 40,000 vacant nursing positions in the NHS in England.

She said she was ‘proud’ of international recruitment efforts which saw nearly 21,000 nurses move to the UK last year.

Although she went on to stress the need to ensure that these nurses were recruited ethically, following the appropriate code of conduct and aligning themselves with the World Health Organization’s red list of countries that do not cannot be actively recruited.

“We need to have an international recruitment program that has parameters and respects the code of conduct,” said Dame Ruth.

A subsequent question from the audience saw the CNO ask how nurses who have chosen to move and work in the UK from redlist countries, such as Nigeria and Ghana, can be protected.

In response, Dame Ruth said: “We must protect people who come here of their own volition.

“Obviously there will be people from these countries coming here.

“They should be welcomed into our NHS and social care sectors, as long as they have the right skills, the right attributes, like any other recruitment process.”

Dame Ruth added that the government was also working with other governments in some of these countries to “make sure we agree and reinforce” the way health workers migrate to the UK.