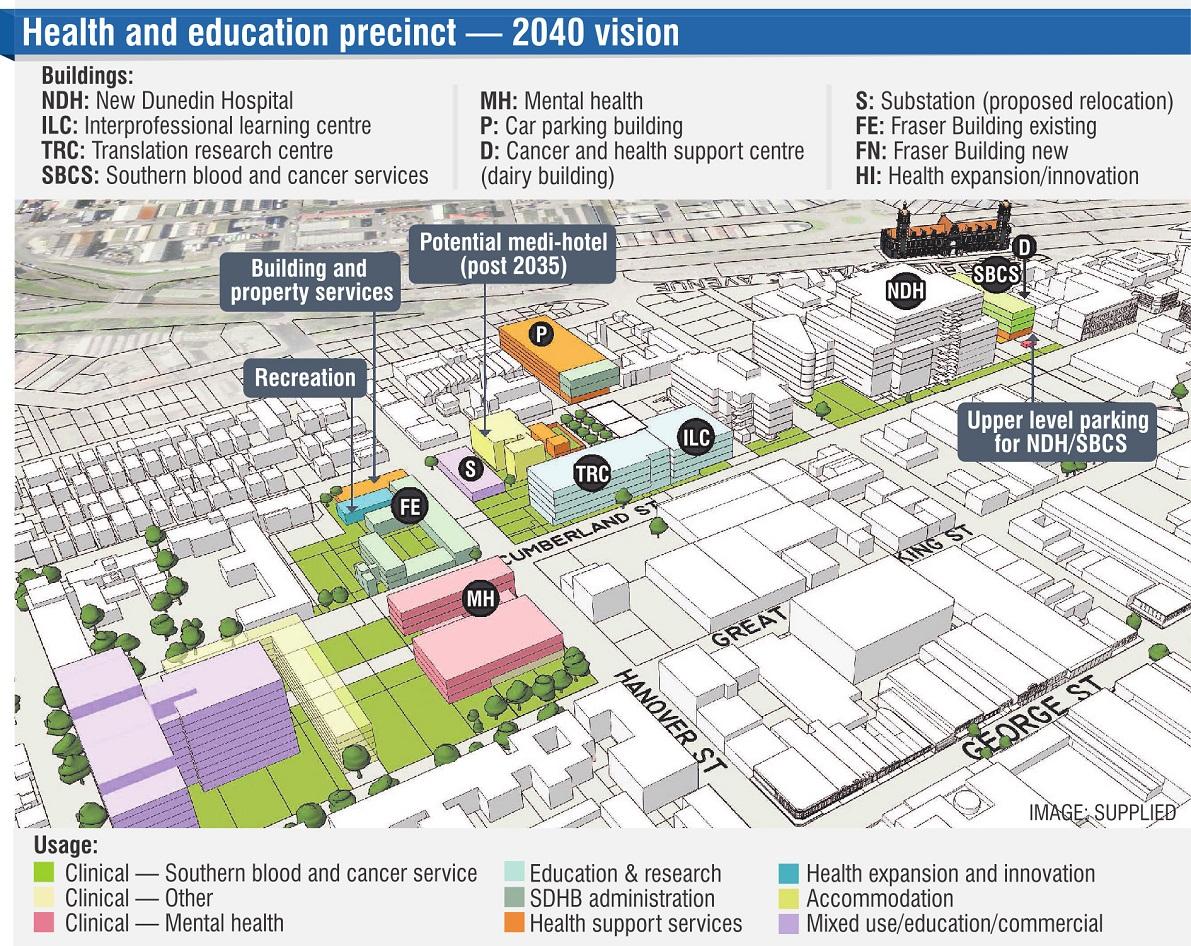 By Joseph R. Duncan Last updated Apr 30, 2022
Share
The Southern District Health Board has unveiled a master plan for a central city health and education district, which includes parking for 500 vehicles and replacing parts of Wakari Hospital.

Chief executive Chris Fleming yesterday unveiled the plan, called Te Whakaari, which sets out a vision for a medical and learning district centered around Dunedin’s new hospital, out to 2080.

Mr Fleming said the DHB had worked with local runaka and higher education institutions to develop a plan that would improve Dunedin city centre.

“In addition to our new hospital, it will provide green space, additional health services and vibrant retail,” Fleming said.

The hub would take up much of Dunedin’s CBD area between the current hospital and Lower Stuart St.

The short-term plan includes parking for 500 vehicles also suitable for electric vehicles and bicycles, the development of an interprofessional learning center for student learning and a center for translational research.

The medium-term plan includes a mental health facility at the current Dunedin hospital site which could provide some of the services currently offered from Wakari.

Mr Fleming said the DHB was working on plans to improve facilities in Wakari and believed it was a better location for long-term hospital services.

However, the master plan provided for the possibility of moving the provision of certain inpatient and outpatient services to the new district.

These services were currently provided from Wakari and the existing Dunedin Hospital.

The current Children’s Pavilion could possibly be demolished after 2030 to accommodate inpatient mental health services.

“Over time, these could be followed by the addition and potential consolidation of the outpatient, community and service management portion of the service which are currently located in Dunedin and Wakari hospitals and elsewhere in the city.

The medium-term plan also includes moving Southern Blood and Cancer Services south to New Dunedin Hospital, where it could be a full stand-alone centre.

Additionally, the historic Dairy Building, retained while the other Cadbury buildings were demolished, could be redeveloped as a cancer support center and/or rehabilitation centre.

The long-term plan leaves room for the development of future services.

Fleming said the master plan supported Dunedin City Council’s central city plan, with the health and education district providing a link between the service district to the north and the cultural and entertainment district to the south.

“It will also strengthen the hospital’s existing links with the local runaka, the University of Otago and Otago Polytechnic,” Mr Fleming said.

“The two plans now set a course and a strong vision for the future of health care and education in this area of ​​the city, truly a ‘health district’.

“It is hoped that these aligned visions will result in greater industry investment in the precinct and put Dunedin on the map as a key center of health excellence,” said Mr Willis.