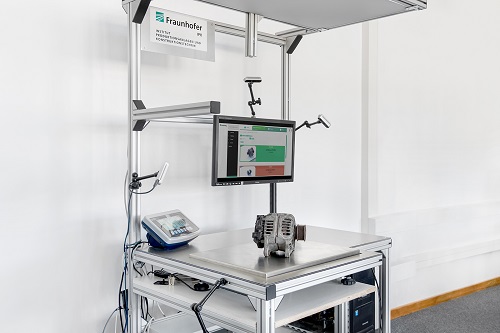 A project to scan second-hand car parts to identify those that can be reused is underway as part of work funded by the “Resource-efficient circular economy – Innovative product cycles” measure. (ReziProK) of the German Federal Ministry of Education and Research.

The goal of the EIBA project is to build a system that 3D scans used car parts to assess their condition and determine if they can be reused.

Circular Economy Solutions, which develops and tests the system at its sites, collected images of around 1,400 different used parts. A neural network is then trained to automatically identify the pieces, achieving a recognition rate of 98.9% in one study.

The part is weighed and scanned with three 3D stereo cameras. The data is combined with all part-specific business data, such as origin, date and location, to identify the part.

The information is processed simultaneously by two AI systems, one trained for image processing and the other trained for business data.

The Fraunhofer Institute for Production Systems and Design Technology IPK and the Technische Universität Berlin are also project partners. Marian Schlüter, scientist at Fraunhofer IPK, explained: “In the automotive industry, once the used part is removed, it is evaluated at the sorting centre. [Circular Economy Solutions in this case] based on certain criteria to determine if it can be reused. It is, however, far from trivial. The part numbers, which are the only visually reliable feature, are no longer legible, scratched, painted over or the nameplates may have fallen off. This means that the worker ends up throwing it away by mistake and it is recycled only as material.

“That’s precisely where AI comes in,” he continued. “It identifies used parts based on their appearance, regardless of part number, and sends them out for a new life.”

Identification characteristics such as weight, volume, shape, size and color characteristics are used, but customer and delivery data are also included in the assessment.

Each year, approximately five to seven percent of the one million used parts Circular Economy Solutions processes, or up to 70,000 parts, are discarded because they cannot be identified. Based on a recognition accuracy of 98.9%, AI-based identification is expected to put 67,200 more used parts back into the cycle than before.